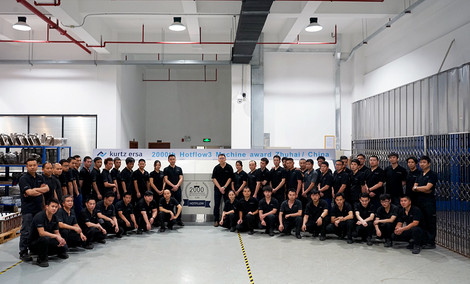 Wertheim/Zhuhai, 20.04.2021
Kurtz Zhuhai Manufacturing (KZM) reaches the next milestone for its successful model with the production of its 2,000th reflow soldering machine – a HOTFLOW 3/26XL. Two years earlier, Sam Ho, Factory Manager at the Chinese site in Zhuhai, announced the completion of the 1,000th “Made in China” reflow soldering system. A real success story that started in 2013 with the first delivery to a Chinese customer. The team in Zhuhai is proud of its reflow customers, including several big players in electronics manufacturing operating in China with not infrequently 20 to 50 installed machines.

This shows how important KZM is as a system supplier in terms of quality and performance for Chinese SMT production. The hybrid machine strategy with a combination of German engineering and the advantages of local procurement and production continues to be a complete success. More than ten different HOTFLOW variants are currently being built in China, and the standard delivery time there is four to six weeks. KZM´s own development and design department directly takes care of the permanently increasing share of customer-specific modifications. “The success of the KZM reflow system is based on the close cooperation between Wertheim and Zhuhai as well as the high commitment of the KZM production team,” said Kurtz Ersa Asia Managing Director Bernd Schenker on the occasion of the anniversary.